Last night, many A-list celebs were in attendance for TIME 100 Gala honoring the 100 most influential people in the world issue. One of those in attendance was Kanye West. West hit the show with his wife Kim Kardashian.

Before the couple made it into the venue, comedian Amy Schumer pulled off an incredibly akward prank. Pretending to photo-bomb the couple, Schumer face plants in the ground causing a hell of a ruckus. If you can’t tell by the photos, the Yeezy’s were not amused. 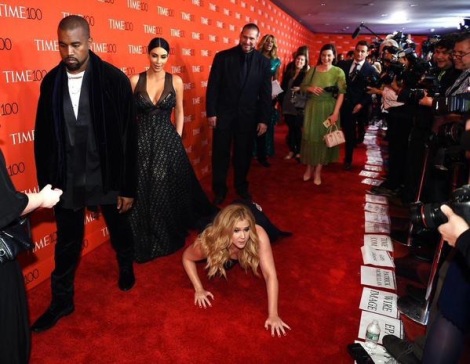 Yeezus pulled it together. He would later hit the stage and performed a 20-minute set that included “Touch The Sky”, “Gold Digger” and his current single “All Day.”

Posts From The Underground

Error: Twitter did not respond. Please wait a few minutes and refresh this page.

Notes From The Underground TV